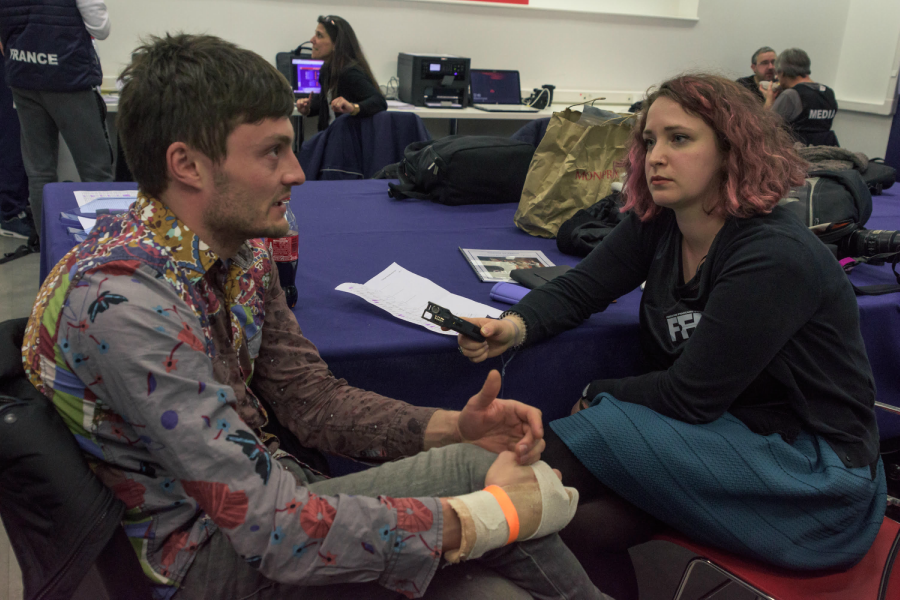 His long and successful career sees him overcoming defeats and hurdles, we take the opportunity to interview the Russian foilist Dmitry Rigin

Born in Siberia and raised in Saint Petersburg, Dmitry is winner of two Universiads and four events of the World Cup, among which one Grand Prix, and also first time winner together with the Russian team of a World Cup. The only award missing is the Olympics. On a rainy Sunday in Paris, at the Coubertin stadium, we see the teams join in the competition, however, without Dmitry. «The coach has decided the team’s younger fencers should take this opportunity to train» he explains while we walk through the labyrinth like corridors which takes us to the press room. Outside the fencing piste, from which he has showed spectators a nervous fencing and attitude, Rigin reveals a calm determination.

What are your next plans?
I’ve got only one plan: I’ll try to qualify for the Olympics, since it’s the highest possible result for any athlete. I’ll try my best to make it because I never participated but I want to.

I really wanted to ask you this, before Rio you were the best in the ranking for Russia, and then you didn’t attend, why?
I haven’t had any possibility to participate there due to this doping thing.

The McLaren report?
Yes, exactly, the McLaren report, since I was in the McLaren report, after maybe six months there were some investigations on it, after they told me «sorry you’re clean, so sorry» (laughs, ed).
But in that moment, it was maybe four days before the start of the Games and there wasn’t any possibility…
(while the photographer Augusto Bizzi is leaving the press room Rigin compliments him for the pictures he took of Foconi, winner of the CIP, ed) so as I was saying there wasn’t any possibility to do anything, because there was not enough time to do the investigations.

Too bad that it happened so close to the Olympics.
Yeah the guys who organise it were very smart to do it (laughs, ed). I know that in some sports there’s a problem with doping, not only in Russia but in many countries.
But in fencing, I have a good relationship with Andrea Baldini and I know his story, I can’t imagine him taking something before the Olympics because he was very strong and it would have been stupid. So I can’t imagine someone in fencing would take something to improve their results. If I’m fast, but not in the right moment or action, I will lose.

I read that you have extra duties in the Federation, apart from athlete’s life?
Yes I’m working in the North-West region, I’m from Saint Petersburg. Russia is divided into five big regions and I’m the head of the North-Western fencing centre. It’s like a foundation that helps the clubs, the kids and the coaches in their work in fencing. I must organise some actions for popularisation, some competitions, give them equipment, it’s like sports management.

Do you enjoy this work?
I just started, six moths ago, in the summer. It’s something new, it’s always very interesting to do something new, especially in my sport because I like it and really want for it to be more popular than it is now. I think that in Italy the situation is a little bit better but maybe still not so popular.

Well no, in Italy it’s all about football and maybe volleyball amongst the “minor” ones, but nothing about the others.
But it could be! It would never be as popular as football for example, because anyone can have a ball and go outside to play, but in my opinion maybe it can be something like golf or tennis, a little bit closer but not for everyone, but it could reach a good level, maybe.

What do you think about the social role of fencing, in Italy it’s still seen as an élite sport. Do you think that something could be changed? And is it the same in Russia?
Generally in Russia we have free clubs, so kids do not pay for their lessons and  for their training. Now we have maybe two or three private clubs where you need to pay.  But generally there are government clubs. It’s like a government programme to improve the public health, to give the kids something to do and not go on the streets and kill somebody, something like this (laughs, ed). But anyway the equipment is still expensive and you need to pay.

Yes you need to if you want to advance.
Yeah but life is generally unfair (laughs, ed). We have money in this world and you need to have it to do something, it’s impossible to live for free, unfortunately. But fencing in Russia is not so expensive, it’s affordable.
But anyway, another view, when everything is free…for example as far as I know private clubs sometimes work better than government ones, because they earn money, and the person that arrives there knows that he will have something for this money and a special focus on his training, so it really depends.
In the States for example, there’s no free fencing, but they have a lot of athletes, more than in any other country, except for China maybe, but it works as well.

You worked with Stefano Cerioni for four years, how was this experience?
In fencing, and maybe a little bit in life too, it was one of the most important experiences for me. At first he arrived with his vision of fencing, which was another, it could have been better or worse than others, but it’s another. Another view on how you build your match and your fencing. And especially not only Cerioni because he arrived with Giovanni Bortolaso e Maurizio Zomparelli. Giovanni also gave me a great understanding, and Maurizio is a real good physical preparation coach, we still use his suggestions and his exercises and system. We add something from our system, combined with his. It was very very good for me, also because all my best results were with this team.

You’ve got a Russian head coach now, what’s changed?
I need to learn again a little bit, because everything’s changed and I need to change my fencing. An athlete cannot be divided from his coach, you cannot do it yourself. This year I started to adapt, last year it was a little hard for me to change very fast, and now I’m starting to adapt my fencing to the new reality.

You didn’t fence in Rio and then you came back into the team, how was the rebuilding of the team after their gold medal at the Games?
For me, all my best results, except the World Cups, I won some World Cup events, but all that I have in official competitions, I have it with the team. I don’t know why, but for me, not that it’s more important but I like to fence in the team, I really like it. Because when you fence for yourself, you can make a mistake and that mistake is only for you, you can say “ok I made this mistake, I don’t care”. But if  there are three more people plus coaches…

And maybe the nation too
Yeah the nation also, yes, but firstly it is for the teammates, because it’s a little hard to think so globally when you’re fencing (laughs, ed). I see the faces of my teammates and I fence for them, for them and for the coaches.
All the team understood that this situation (the doping allegation, ed) was stupid and we have a good relationship, I was also in Rio but only as…a fan (laughs, ed).

Were you a sparring partner to your teammates there?
Yes, I was a sparring partner for my teammates at the training camp in Rio. We have done a big work together before the Olympics, and for me it was very important to help them in this finish line. But for me, this camp was like a book of one of my favourite writers, Hunter S. Thompson The Curse of Lono. Staying at the paradise without any pleasure.

I noticed that Russia is one of the few nations whose athletes go supporting the others after losing.
Yes, because you’ll be stronger if you can find the power inside you to support your opponent after you lose. If some guy from Russia is fencing and I see him and think «it’d be good if he loses» I will never change, he will win or lose without my idea, but I will lose power for it. I must focus on my fencing not the others’.
If I support him and he wins, I will be happy, it’s a good sensation, much better than jealousy or anger (smiles, ed).