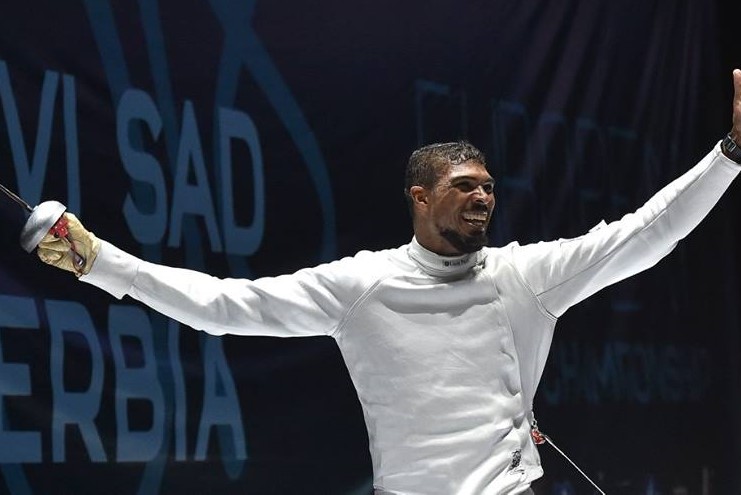 Winner of the third gold medal in a row at the European Championships, we take the opportunity to interview the epeeist.

We met a smiling Yannick Borel the day after the competition in Novi Sad. He’s waiting in the basement, where he’s supporting a French fencer, and we go upstairs in a little interview area we arranged. On our way up, he had to stop every three steps because everyone in the venue wanted to greet him.

Let’s start talking about this third gold in a row that you won here at the European Championships.
I tried to focus not on the third gold but on each match I did, as I didn’t want to be trapped in this «third» thing. I just wanted to win but also to take each match separately because it’s really hard to win at the European championships. European fencers are really strong so it’s always a hard competition for me.

It seems even harder than at the World Championships somehow.
Yes the poules make it really strange, as you might find a very hard match at first, then maybe a little less hard and then a very difficult match again, so you have to deal with it, and do the best you can.

What are your goals for the Worlds?
To keep the same spirit. I know each match will be hard, I don’t underestimate any opponent because on one day like this everyone wants to do the best he can, since it’s the end of the season too, so I will try to do the best with my fencing, and the best I will get on that day. I wish it would be a big challenge for me, and I hope I will be good.

Also because you won a lot but you never won a World Championship.
Never, only with the team, but not in the individual event, that’s the result I miss and I’m trying to get it every year so maybe this time, I hope.

I read on L’Équipe that you’ve been compared with Zidane.
My friends from the French sabre team call me like that, I want to get this out of my mind because you have to focus on what you are doing and not what you can do or not. I try to think ok, that’s a joke and just move on (laughs, ed).

About the team, since Lucenay and Grumier left, do you feel like you’re the leader now?
Yes, I’m one of the oldest of the French team right now, with Ronan Gustin. We have this leadership now so we try to give our teammates the example of how you have to search for a gold medal, and get it, because nobody will give you this medal. So we also want the title, and in my old memories I always remember France winning and they gave me that spirit. I think I have it deep down, so I will try to teach the younger epeeists this, Alex Fava is new in the team, and maybe also Gally will be a new member of the team because Jérent’s back is injured, with two new people in the team we have to pull them and inspire them to do the best we can do, and I think we can get the title. Maybe against Italy (laughs, ed).

Well, I can’t wish you that.
I think the Italian team is surprising, they can do really good stuff, and sometimes also bad. But they are strong, and everybody knows that. They won the silver medal at the Olympics against us, even if we had won the silver on that day it’s something you wait for years, so when you get this medal you’re proud of you, proud of the team and now you know you can do some really good stuff so we got that spirit and we have to move forward with it and to keep it all the time.

What is the state-of-art of French epee?
As you said the team is really younger than two or three years ago and we have to work more because they don’t have the experience of Robeiri, Grumier or Lucenay so now we got this experience and they don’t, so they have to work more and more in the training sessions to do better at any World Cup event and then Championships.

How does your training schedule look like?
I train five days a week, generally. We all train together, but we are not professionals. So some people are studying, others work, so we often join the training at the end of the afternoon, so maybe 4pm until 7pm or 8pm. We do two or three training with matches per week and then we have physical preparation. It’s not big but we try to do the best we can when we can meet all together. I am almost professional, so I can train more.

So you’re originally from Guadeloupe and a lot of fencers are too.
Yes, in epee there’s Daniel Jérent, me, Mathias Biabiany and in foil Ysaora Thibus, Anita Blaze and Enzo Lefort.

Is there a secret in the island to have so many good fencers?
It’s a little island, but we have a lot of natural qualities and a good fencing school.  I started there and I left at nineteen years old. Laura Flessel is from Guadeloupe too, maybe there’s a kind of culture of fencing there and we have some champions in other sports too, in Judo there’s Teddy Riner. We say Guadeloupe terre de champions, champions earth.