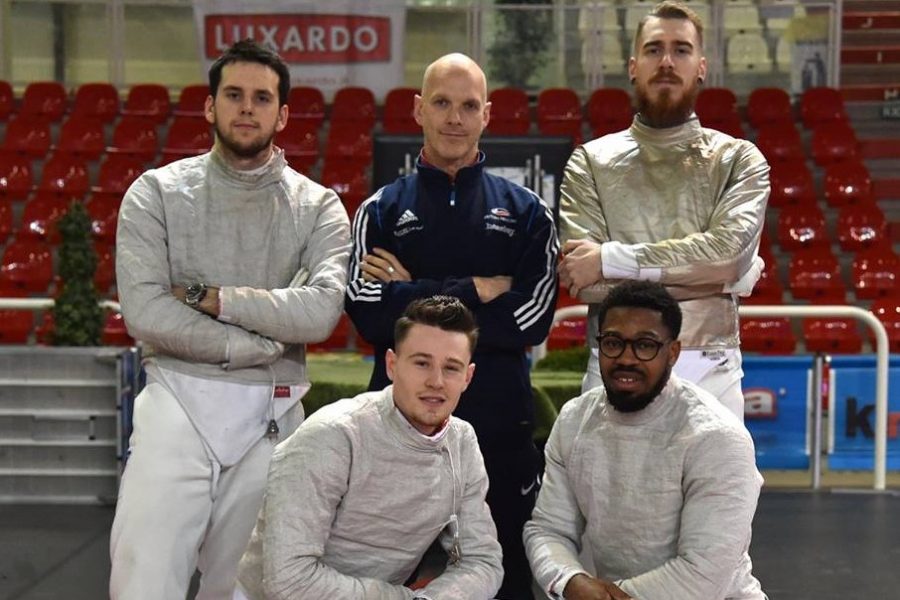 The British team all finished within the L32 or better at the European Championships, we’ve interviewed the sabreurs

We met Will Deary, James Honeybone, Curtis Miller and Jonathan Webb, together with their coach Jon Salfield, after the team competition, where they claimed the ninth place. The sabreurs have a fierce determination and a capacity of holding together that made them overcome some hurdles.

How about British Sabre, what does it look like right now?
Jonathan Webb – At the moment we have the senior squad training pretty much every day on our own, so we’re having to organise our own training because of the funding cuts after the Rio Olympics. After that we were left in a bit of a position where everyone didn’t really know what was going on, and everyone was a bit confused about our future as a sport. But as a group of guys, not just us four, but the Juniors as well, we sort of sat down and decided that we still want to make it work, we still want to make our dreams a reality; so we were just working towards the same thing, off our own backs. A lot of us have got jobs on the side just to afford the competitions and outside of our jobs we are just arranging training sessions when we can. We have three set training sessions a week and then outside of that, our gym sessions and our extra sparring sessions as well, which we are just sort of creating as and when we can. We’re just trying to make the best of a bad situation really. And it’s going quite well, team spirit hasn’t dropped that much, there was quite a hard time straight after this funding decision but I think, especially for us four, nothing really changed in terms of what we want from the sport and what we want to get out of it so we just created a plan for ourselves.

About these European Championships, what were your aims and did you succeed in what you were expecting?
James Honeybone – Individually, to have all four of us in the top 32, that has never happened before for a GB sabre team in a major Championships. So to have all four of us in the 32, myself in the 16, that’s really positive and promising and a huge improvement from the last couple of years where, maybe for some of the guys it was different, but under funding the results were nowhere near as good as they are now and personally I think we’ve improved a huge amount. As JJ (Jonathan Webb, ed) said, even though we’ve lost funding,  I think everything has become a lot more positive, that has really brought us all together a lot more. Team spirit is much higher, we are working really hard off our own backs, as JJ said, and the fact that there is no funding and we are just doing this ourselves – I work full time for Leon Paul, Will is a University student, JJ and Curtis do coaching. We all want this, if everything is funded you get a salary, so maybe you’re doing it because it’s a nice thing to do. For us it’s our dream, it’s what we want to do, we’re willing to put everything into it. If we don’t have self motivation then there’s no one to kick us and tell us that we have to go training, because it’s up to us, we have to work off our backs. So to get all four of us into the top 32 here at the European Championships, in this event Russia didn’t manage that, Italy didn’t manage that, so you’ve got some of the biggest nation in the world here.

What about the coming Worlds?
Will Deary – So three of the four of us are going to go to a training camp a few weeks before, and train up there, acclimatise to the time difference and try and prepare as well as we can for the World Championships. Ideally, I think we all want to try and get another four 32s if not better and then we’re also trying to improve our World Ranking to qualify as a team for the Tokyo Olympics.

James Honeybone – Which a couple of years ago seemed like it wasn’t a possibility at all. Now down to the fact that we’ve all been working so hard, and Jon Salfield, our team coach, has been working so hard with us, once again, we are all just working for this because we want to and now, I think we will all keep working, keep improving the way we are, it’s a real possibility.