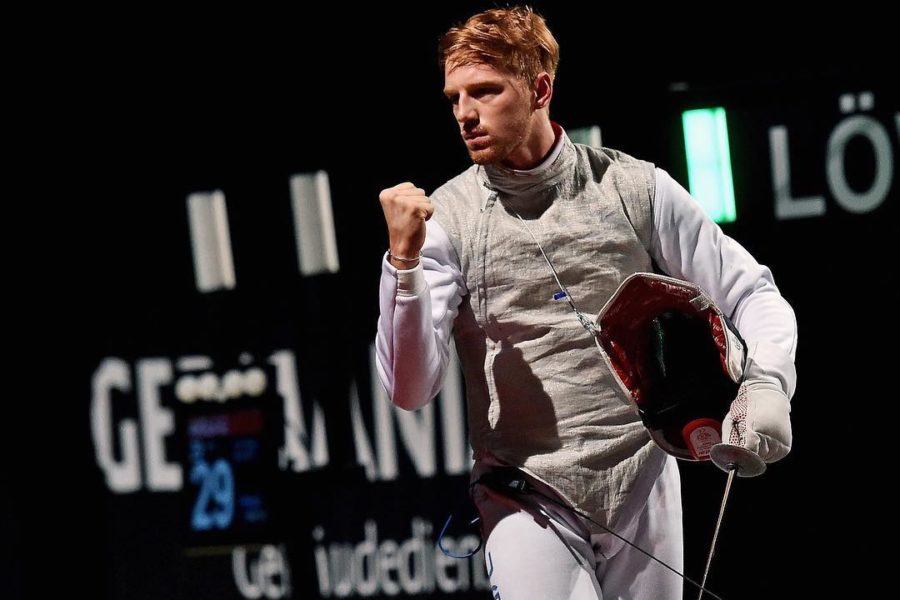 Hopes, ideas, dreams, and values, we take the opportunity to talk to United States foilist and current World Number 1

An invincible passion for fencing, a love of music, his job as a model and the will to express his own ideas and values.With qualification for the Tokyo Olympics fast approaching Race Imboden decided to change coach and relocate to Europe to train with an Italian team made up of Stefano Cerioni and Maurizio Zomparelli. The foilist joins me in the press room of the Stade de Coubertin expressing a kind smile.

Let’s start with your targets for the season
Last year I finished third in the world, I’d love to move higher and do as well as I can in every single competition. Especially at the end of the year, at the last two events, which is the beginning of qualification and really focus on big events like the World Championships and Olympic Games.

What about the team?
Our focus should be on the World Championships, we really want to capitalise on the big event. We had a great season last year but we missed out on the World title and now we want it.

Last year you knelt on the podium, joining the protest against Trump’s policies started by NFL former player Colin Kaepernick, what do you think is the role of politics in sports?
Politics and sports go hand in hand. Throughout history we’ve had highly influential sportspeople, especially in America from Mohammed Ali to LeBron James. I think it’s important to have your beliefs and to stand up for them. Personally I believe it’s something it would be looked back on negatively so it’s important for me to show my feelings towards it but at the same time it’s not necessary for everyone, I understand that. Kneeling was me speaking about my country especially as I think it’s important to acknowledge what is going on there at the moment. It’s important to speak out and to stand up for people who don’t have a voice and in fencing especially, I think there’s a majority and I just want to speak for the people who wouldn’t have a voice. 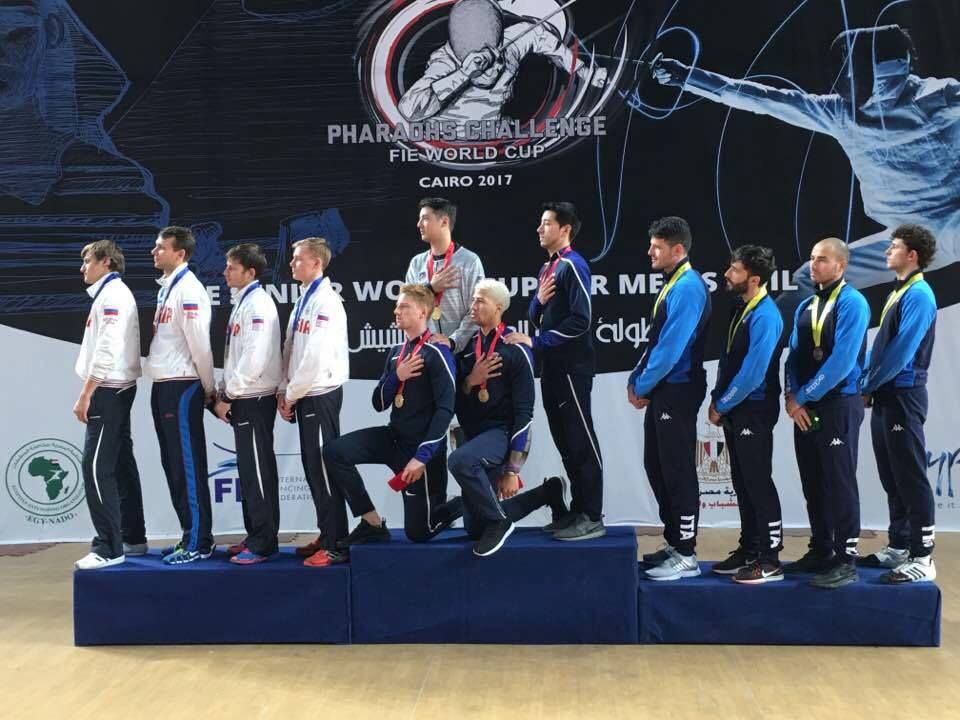 You also spoke about the situation with pregnancy for women fencers. What do you think about women’s situation in our sport?
It’s the attitude towards women in sports in general. They have a very hard time because often they fulfil two roles. Men are lucky because as athletes we can concentrate fully on being a sportsman. A lot of the time we don’t feel the pressure of being a father. We can fulfil that role at home but as soon as we leave we’re competitors, we’re athletes, whereas mothers like Serena Williams or even fencers like Mariel Zagunis are athletes, but there’s also full time mothers. Wherever they go they have to be mothers first and then athletes. That’s a lot of pressure for female athletes and there are no rules or guidelines to support them and I think something should be in place so if pregnancy occurs there’s a better way to handle the situation to support them. Unfortunately I don’t have a good answer, that’s the problem, but I would love to start a discussion, but I would love to just speak about it to say that there’s something wrong and there’s definitely ways to improve this situation. Female athletes are also my role models, including my girlfriend who is also a fencer. I’d hate to see her in that situation, I definitely think it’s more difficult for them than for us which is unequal.

You recently changed coach and you’re now working with Stefano Cerioni
Yes, I’m working with Stefano and it’s been unbelievable to have somebody who works so hard and is so dedicated to you and the sport. He’s really dedicated to the sport and it’s amazing, I’ve come to pick him up and go train in LA and he’s watching fencing videos, I’m like «Come on, take a break man» (laughs, ed) but I love it. He’s a really nice guy and I’ve always seen him on the other side of the strip so his persona has always been against me, and now I have him behind me. I understand how he brought so much success to so many countries, he knows fencing very well, he competes with his heart for all his athletes and I now have more respect for him than before. Working with him of course, I’m very lucky.
The team is really great, I have Cerioni, Maurizio Zomparelli, and my girlfriend Ysaora Thibus, we kind of travel as a team. We spend a lot of time in Europe, training in Italy and France.

How was your experience in Jesi which is a historical club?
I’m a big fencing guy, so I’ve known about Jesi for a long time, obviously seeing all the women fence, and to go there and to fence there…in Italy, is always something special. Italy has amazing schools and amazing history in fencing so to go to a club and be surrounded by Olympic champions. To have Vezzali to speak to, it’s an amazing experience, it’s so dense, the competition is so dense, just the power that the country has for fencing it’s incredible. To be there taking lessons with Stefano was even more special and they were very welcoming, everyone was really nice. There’s a competitive atmosphere but not in a negative way, it’s not like «I hate you» or «I don’t want you to succeed», it’s more like we are all competing against each other but in a positive way, which is very nice. 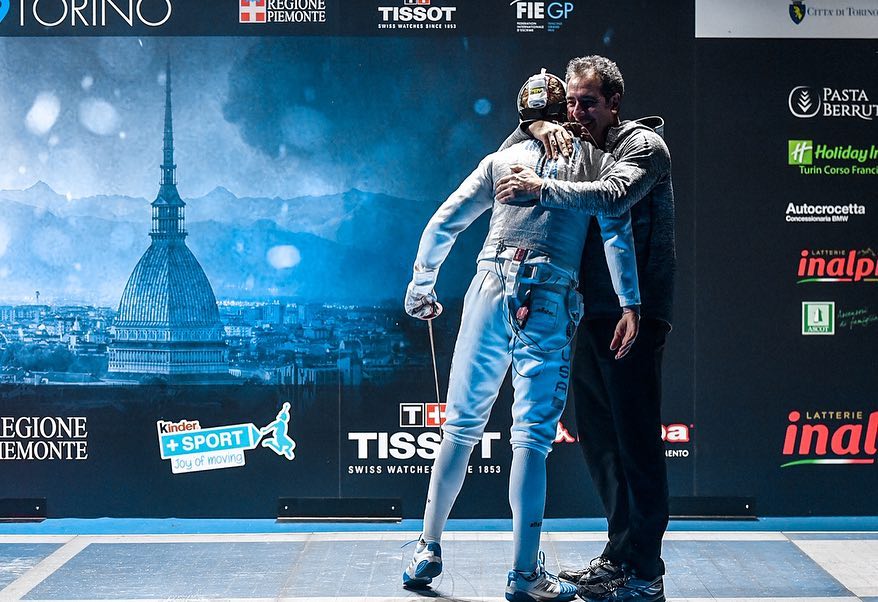 I know you’re also into music and into modelling, how do you manage to do everything?
Yeah so fencing is my priority, nothing comes before fencing. Modelling is something that I do when I have time, if I have a few weeks where I am only training then I’ll go maybe one day to a job and mostly just to make money, I wouldn’t necessarily call it a passion, it’s more like my job.
And then music is something that I’ve always done, I’ve always loved and when I was young and broken I deejayed and everyone knows about that somehow and now I have music playing all the time, I had my headphones on when I came in here, at home and I bring speakers everywhere.
Music adds colour and my memories are with music, different types of music reminds me of different things.

I know it’s normally difficult to say but do have a favourite?
No, I don’t have a favourite, favourite. I have many artists that I like, I grew up listening to some of my father’s records, like The Beatles, Rock and Punk albums and then I got into The Gorillaz when I was pretty young and I loved that they were mixing Hip Hop and New Age. I lived in Brooklyn and I ended up listening to a lot of Hip Hop and now I’m in France I was listening to this girl called Angèle, kind of Indie Pop, she’s great, go check her out!