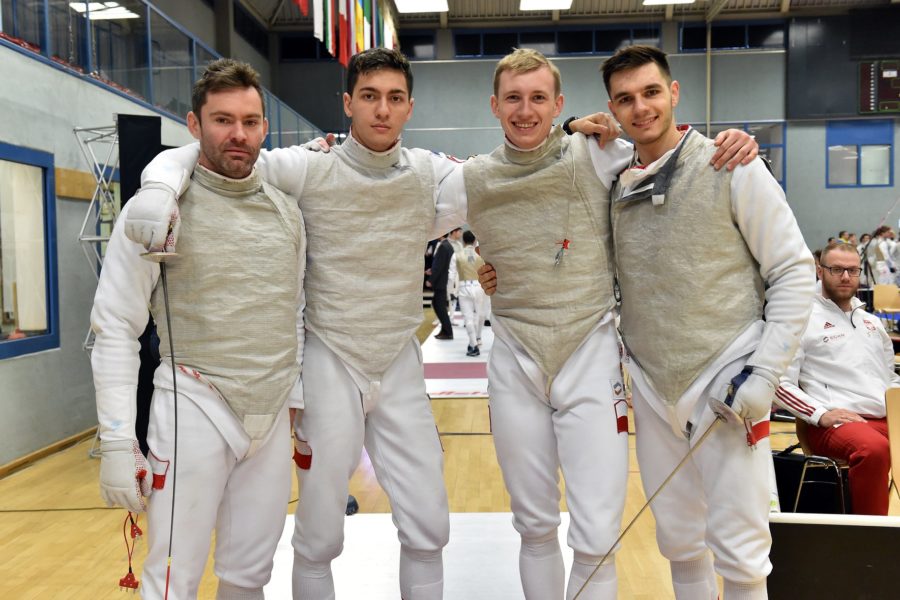 After winning bronze medals at the last European Championships, the Polish Men’s Foil team are now ranked eighth in the world. An interview with a team unafraid of challenging their most established rivals.

After winning in Novi Sad and after a good World Cup season Andrzej Rządkowski, Michał Siess, Leszek Rajski and Krystian Gryglewski sat down and talked about team building, their success, aims and hopes of a young team now aiming for Olympic qualification.

Siess – Our main goal is to qualify to the Olympic Games, we are getting better and better and last year we won bronze at the European Championships. We feel we’re improving and we have a chance to qualify.

Gryglewski – Our strength is that we have some kind of team spirit. During competitions if someone is performing badly the others fence very well and we rely on each other.

Rajski – Each one of us is a good fencer, maybe our individual results are not as reflective although we built some special team spirit. We know we can do better as we’re capable of defeating some very good opponents. Right now, we’ve got off to a good start and we need to build from here.

Gryglewski – Team competitions are different compared to individuals, our main objective is to maintain a positive atmosphere within the team. I suppose we are all good fencers and if we fence to the best of our abilities we are a threat to any team. Rajski is our most experienced fencer (born in 83, ed) while we’re all younger (Gryglewski and Siess 94, Rządkowski 97, ed).

Rajski – I have good advice, but we all do. It’s the four of us and we combine ideas. There’s more thinking time during Team Events compared to individuals when we’re simply one on one. Having teammates can ease pressure. If one of us isn’t performing well, then another one of us can lift the team with a better performance.

Rządkowski – We have a good connection. Comparing our individual and team results is strange as we generally do worse individually than as a team.

Siess – Maybe it’s the goal to qualify for the Olympics, it’s our dream and this makes us stronger during team events.