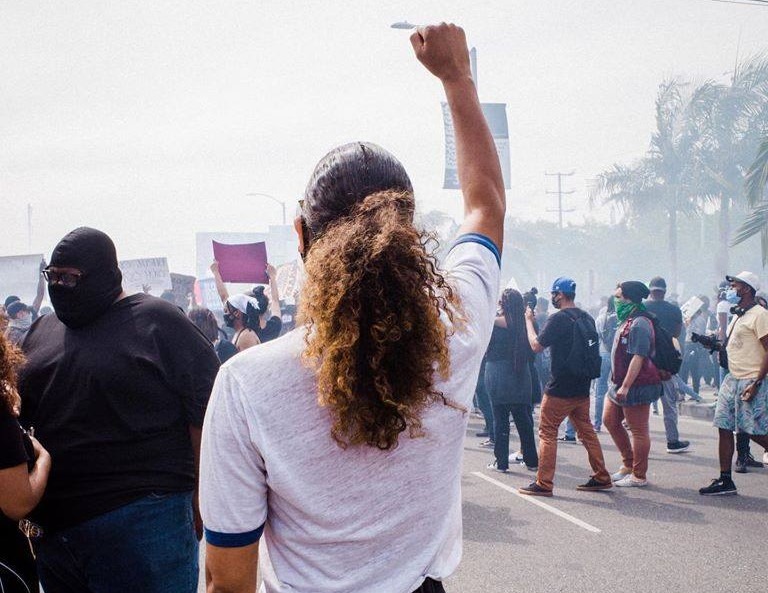 Some athletes made their voices heard directly during the days of the protests in the streets in the US. Pianeta Scherma is on their side. Fighting discrimination is a civic and moral duty. The editor Gabriele Lippi’s column

Race Imboden and Ysaora Thibus took to the streets. Miles Chamley Watson had “Black Lives Matter” silkscreened on his mask. Nzingha Prescod reported acts of racist bullying during a Zoom public chat. An American coach has been fired for expressing a strongly discriminatory opinion about the African American community. This is news that you will have read – and will read more on Pianeta Scherma – not because we think we have to discuss a sensible topic to gain a few clicks but because we think it is right to do so.

The murderer of George Floyd in Minneapolis focused the mainstream public’s attention on the unsolved problem of systemic racism in the United States. This is a civilization that’s still deeply influenced by its slaver and segregationist past, which perpetuates its ethnical discriminations through different means that are subtler than before. Of course in 2020 the African Americans have the right to vote in all of the fifty States of the US; they can sit on the front seats of a bus; they are not forced to work as slaves on the cotton fields and lynching and hangings are legally recognised and persecuted as crimes.

Still, it’s very difficult for youngsters who have grown up in certain urban areas reserved for minorities to access high-quality education which is essential in order for them to gain real social mobility. They have problems with acquiring mortgages from the banks for the purchase of a house.

Protests which flared up in the US arrived in Europe, even in Italy. The protestors hit the symbols of oppression, targeting the statues of confederate generals, slave traders, colonialists. They involved especially the athletes we write about daily on these virtual pages, in competition times, where we describe their lunges, parrys and rispostes, and their successes. We still write about them even in this situation and we do it with conviction.

We have been on Race Imboden’s side when he knelt on the Pan American Games podium (even before the death of George Floyd) to express his solidarity with the protests for Colin Kaepernick, the quarterback who was fired by the NFL for bending the knee during the national anthem – in open contrast with President Trump’s policies.

Even more, we identify ourselves with Race Imboden. We would like to have just a fraction of his bravery. His is the courage of a white man who, day after day, uses his privileges to serve a higher cause. He does not rest on a centuries-old social balance that benefits him – he is committed to upset that balance by promoting equality for all. Race lost the sympathies of a big portion of the American and non-American public (Republicans buy sneakers, but some of them even follow fencing) but that did not stop him from continuing his battle. We are on the side of Race Imboden, Miles Chamley Watson, and Ysaora Thibus. We are also on the side of Nzingha Prescod – who carries with her name the memory of the Queen of Matamba who resisted the Portuguese advance in Angola in the 17th century – and Ibtihaj Muhammad, who is on the front line for the right of representing Muslim women in the Western world and in the world of sport.

We are and we will be on their side and on the side of whoever opposes any form of discrimination. We are against racism, against homophobia, against sexism. We believe that sport is never just sport but a combination of athletics, life and politics in the highest sense of the term. The very same values of the Olympism are inspired by the purest political principles – respect of diversity, of brotherhood, of union among populations. For all these reasons, on Pianeta Scherma, you will read more stories of athletes who are also activists or spokespersons for the civil right movements of every minority. They are athletes who speak out for those who cannot. And if you don’t like it, you need to read other websites.