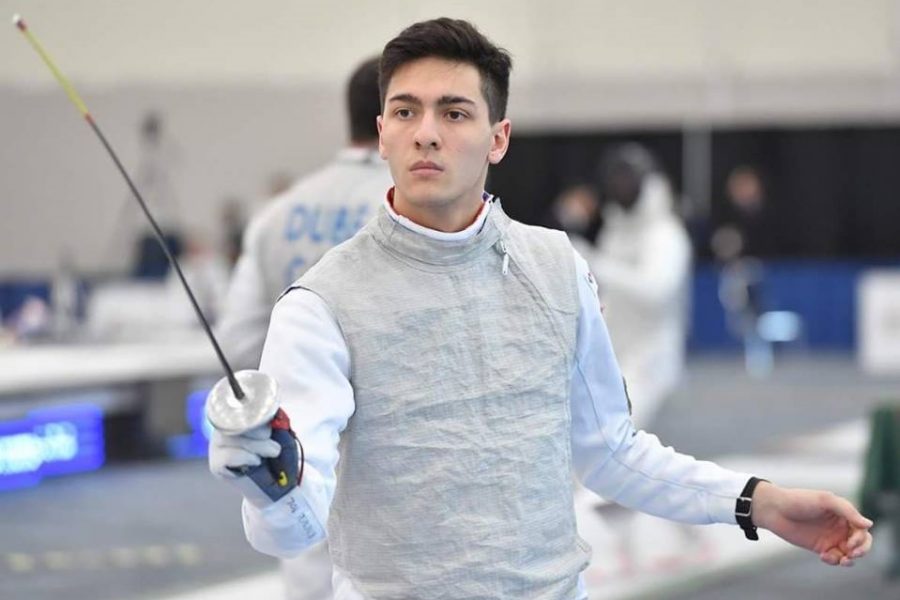 The Polish foilist that studies, trains and lives in Wrocław. We met him at the European Championships in Novi Sad.

Born in 97, Andrzej Rządkowski won medals at Junior and Cadet Championships. He’s been competing at Senior level for some time and we managed to catch up with him in Novi Sad. Together with his teammates, he won a bronze medal in a match with an unrecognisable France and the Polish team managed to access the third place final in an emotional and arduous bout with Germany. We talked about his aims, his interests and about fencing in Poland and Italy. Talking about the poor state of some clubs in Italy he told me «I thought that fencing was a national sport in Italy, like a traditional legacy». When I told him it’s all about football in Italy he answered «but your national team didn’t even qualify in the World Cup». I had the feeling that we all struggle to make this sport more popular, regardless of how many medals we win and how successful as a nation we are.
Sense of irony, sangfroid but resolute, the fencer has been climbing the FIE ranking claiming a better place year after year.

What’s the difference between Junior and Cadets and Senior in terms of training and expectations?
It’s quite obvious that it’s more difficult.When competing in Junior and Cadets I didn’t have to train that hard, I didn’t need to fully commit myself to this. About three or four training sessions a week was enough to achieve a good result, or win a medal, but right now it’s impossible. If you want to achieve something within the Seniors you have to give more, you have to train more, it’s necessary. You have to sometimes train twice a day, it’s more like an endless camp. I also study and it’s pretty hard.

And what about the environment? Is it a bit more stressful?
I’m quite a specific fencer, I don’t shout during my bouts, I don’t show emotions. It’s like, I go, I fence and then…go back. Winning or losing, I don’t know, I think it’s quite strange when I look at the others.

You made it into the eight in Bonn, I think it was your best result in a Senior event, how was that experience?
It was, previously I’ve finished in the top sixteen and then made it to the last eight. It was the largest World Cup of the season and had around 250 fencers or more.
I was quite lucky because I won my first bout, which was alright, not so exhausting. Then I would have fenced Chamley-Watson, he was World Champion and is a really good fencer but he lost to Toldo. Then, after Toldo, I would theoretically had a bout against Garozzo but Garozzo lost his first bout with someone. I was quite fortunate, but I don’t blame myself for that, you need to know how to use luck.

What were your goals for this season?
The first half of the season wasn’t great, while the previous year, I felt terrible. By December I started to fence the way I want and in Turin did something I wanted to do. It was a good tournament, I wanted to be in top 40 maybe 30 and I’m 34th right now. Or I was before a terrible start here (Rządkowski lost to Avola in the first round in Novi, ed). That was bad luck because Avola fenced really well that day, he beat Kruse and he was 11 – 0 up. Maybe it wasn’t unfair because you can’t say that something is unfair here, we all fence at a good level, but it was bad luck, it could have been better.
But I didn’t think about my goals that much, I just want to fence good, if it’s good it is good.

And now, what are your goals for the World Championships? to fence well?
If you want to achieve you have to fence well obviously, you can’t fence terribly (laughs, ed). I think I have to be in the top 64 at the tournament, it’s necessary, but maybe top 32 or top 16, if it’s better then it’s better. 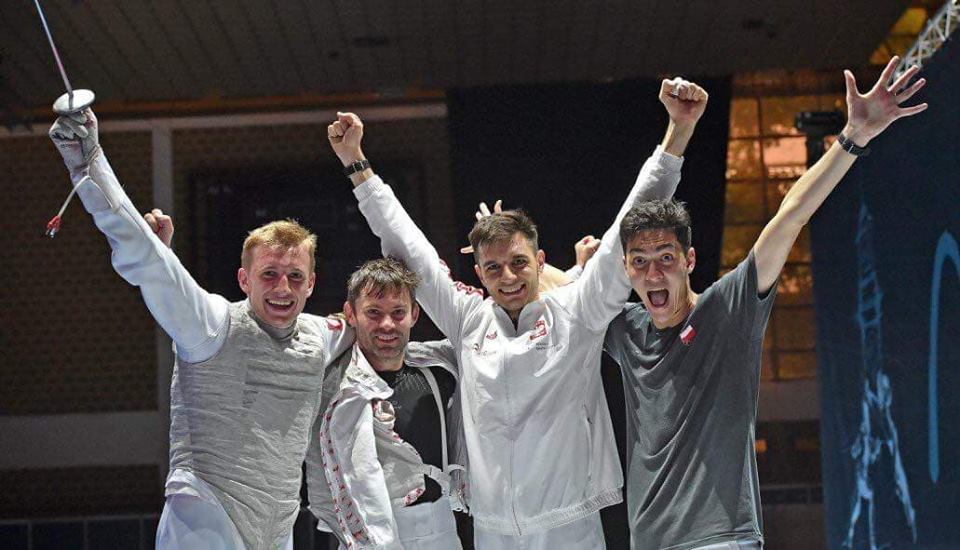 Is fencing popular in Poland?
Good question, it’s as so popular as it was during Communism. A lot of sports that were prominent at the time, for example boxing and fencing, are not now. Sports was supported as a form of propaganda. Even after the Soviet Union ended we were good in fencing, we had team medallists at the Olympics, and Olympians. Right now is getting much worse, if it gets worse you’ll get less money and then it’s a downward spiral.

How the system?
There are four main clubs for men’s foil, one in Warsaw, two in Gdansk, one in Poznan. We have a national coach and sometimes we have national camps, but usually before official competitions or before the start of the season. We normally train in clubs.
I fence, study and live in Wrocław. My club is in a cellar, we share our hall with a school, it doesn’t have pistes, the ground is also a bit slippery, and it’s sometimes dangerous. But it’s not so bad, we manage.

Do you think fencing is perceived as an elite sport in Poland?
It is, because it’s much more expensive than other sports, you have to pay for the equipment, for your weapons.

Do you think there’s a link between the costs of fencing and fencing being perceived as elitist?
I don’t think people in Poland actually think about fencing at all, so I can’t tell you (laughs, ed). If it’s on during the Olympics people can watch it but can’t understand anything except epee, maybe. The only thing I hear from someone that doesn’t know anything about fencing is «oh it’s so easy you just jump and touch each other, is it exhausting? is it tiring or something?» and I’m like «say no more, please» (laughs, ed).

How do you balance training and studies?
I have a good deal with my university, I study Law at Wrocław.

Do you find it difficult?
It’s not easy, I don’t think anything is easy when you train not as an amateur but more as a professional. Although I find it hard to say that I’m a professional, as I don’t get money for this, I can get a scholarship but not a salary. When you don’t have great results, like you don’t win medals, you don’t even get a scholarship.
I study, it’s okay so far, one day I’ll have to decide, just choosing one thing to focus on more than the other, I’ll have to take maybe one gap year before the Olympics or something, well I’m not sure yet, but I think I will have to decide. 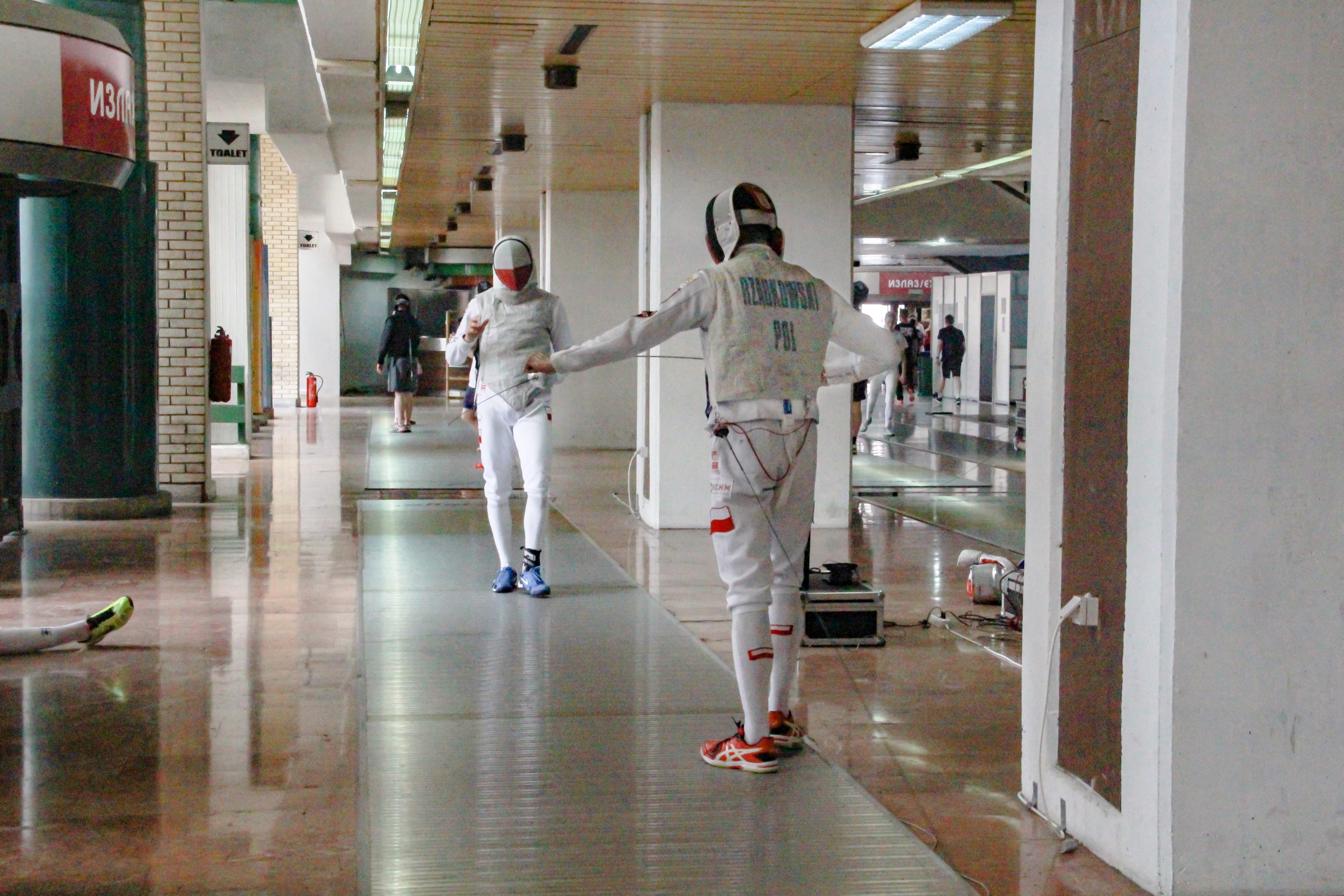 You said you have a good deal with your University, is it the scholarship?
I don’t have to take part in the classes but I have to learn and study on my own, and then take the exams. It looks easy like this but it’s not because sometimes you wake up before some exams and think «I didn’t do anything» it’s much easier to hang around with your friends, learn together and do it systematically.

Do you like what you study? Do you think it’s going to be your life choice in the future?
I don’t know, I just do it because I know I’m not going to be forever connected to sports. I’m not going to become a coach or something. It’s my plan B, because if I get an injury and can’t fence any more I have to do something. I’ll have to live somehow and one day I’ll have to move from my parents place and live on my own, at some point, maybe at 50 (laughs, ed).

What are your off-piste interests?
I used to play chess, and sometimes I still play but very rarely now. In fact I don’t have time for this, I like listening to music, like everyone, I like playing computer games, like most people I guess…maybe TV series.

They say that fencing is like physical chess.
It is, I agree. But I wasn’t really interested in chess, I just played, I took part in a chess classes for about a few years but didn’t actually learn anything, I was just sitting there, watching the black board and played with the others when they told me to play. But right now my life revolves around fencing and studying.

I know there’s worse but sometimes it might be a bit hard.
I don’t think so, I sometimes look at my friends that are just studying and whose lives are not connected with sports or anything. They just have to think about other things like their flat, as they live on their own, or their friends, girlfriends, boyfriends, normal life, and I don’t know what’s worse or harder.
It always looks easier, the grass is always greener…